In a move that should make sheep around the world rejoice (more on that below), we are pleased to share the news that Adjuvant has committed $7 million to help Boulder, Colorado-based InDevR commercialize its multiplexed protein quantification technology and expand the menu of essential biologics that can be characterized. InDevR’s partially-automated benchtop potency testing platform, VaxArray, is up to 24x faster and 100x more sensitive than existing methods. The technology is already being used in production of seasonal flu shots with a wide range of follow-on applications currently under development, including validation of VaxArray for measles-rubella vaccine potency testing under a series of grants from the Bill & Melinda Gates Foundation. 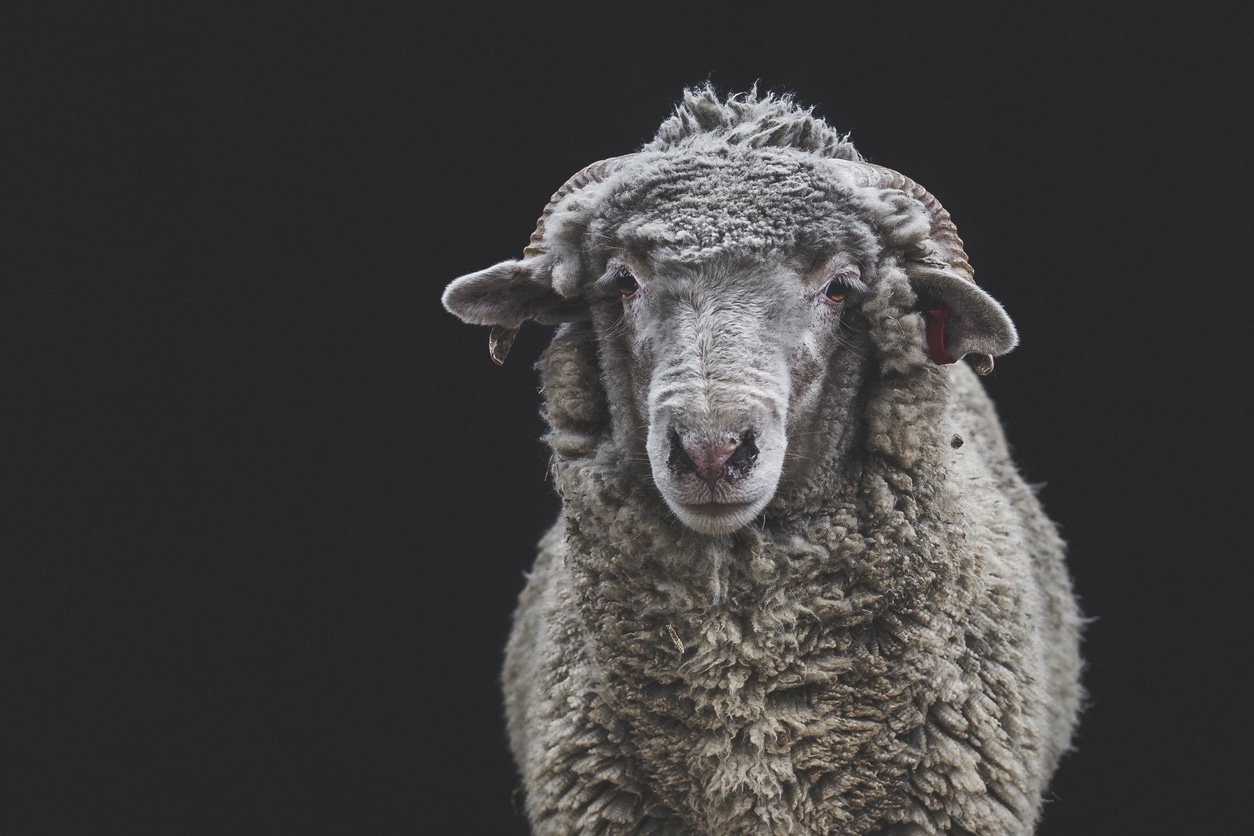 We Weren’t Kidding About the Sheep…

Imagine a lab technician sitting at a bench with a pipette, a ruler, a vaccine sample, and a bucket of sheep’s blood. No, this isn’t precision witchcraft; it’s actually a widely-used method for measuring vaccine potency, which is a critical step performed throughout the manufacturing process to ensure safety and efficacy. Potency testing is essential because under- and over-filling can have serious adverse implications for vaccine recipients, risking an insufficient immune response on one hand, and adverse reactions from excessive antigen exposure on the other.

Despite being essential to the vaccine development and quality control processes, these potency tests have in many cases enjoyed almost no innovation in recent decades (that’s right, decades). This is largely a symptom of the inertia that often builds up in a highly regulated sector such as biologics, where even minor changes to the manufacturing and characterization process can be hugely expensive and risk temporary revocation of marketing authorization.

There is perhaps no better example of this inertia than the current gold-standard potency assay used in the production of seasonal influenza vaccines, a method known as single radial immunodiffusion (SRID) that has seen effectively no innovation since its introduction over 40 years ago. At a high-level, this assay involves mixing serially diluted vaccine samples with an antibody solution (typically derived—in large volumes—from the blood of immunized sheep) and pipetting the two into an agar gel. The sample then diffuses until it reaches a zone of equivalence with the antibody dilution, forming a visible ring. After washing, drying and staining the sample, the diffusion ring is then measured (typically with the naked eye and a ruler!), with a larger ring area signifying greater potency. This is all done by hand, requiring up to six hours of intensive focus from a trained lab technician, and results are not available for up to three days. Given that potency testing is typically performed between five and ten times throughout the manufacturing process for seasonal flu shots, this outdated assay can add weeks of time and significant costs to the entire manufacturing process. This is bearing in mind that time-to-market is of critical importance for seasonal flu shots, where even a week of saved time could potentially prevent thousands of severe cases each year. 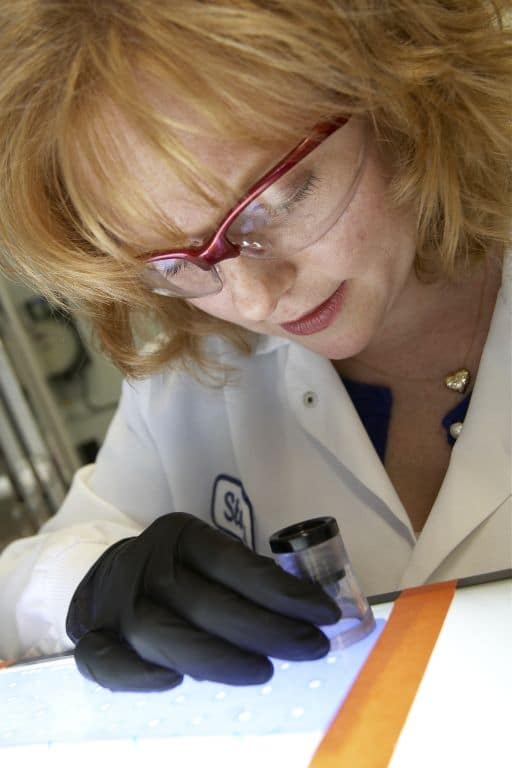 A laboratory technician manually reads single radial immunodiffusion (SRID) results by visually assessing the size of stained sample discs relative to control discs, with results from a range of sample dilutions plotted to calculate the potency of the vaccine under evaluation.

From Agar Sheets to Microarray Chips

InDevR first began exploring possible innovations in this space thanks to funding from the U.S. government, inspired by a pretty simple idea: Let’s see if we can replace the sheep’s blood and ruler with a computer imaging device that can perform these tests in a fraction of the time with markedly lower costs and much greater sensitivity. Thanks to advances in biologic “printing” technology and machine “vision,” InDevr has demonstrated that potency testing can be moved from labor-intensive agar sheets to largely automated microarray “chips,” with substantial improvements in cost, speed, and sensitivity along the way.

Now, several years later, InDevR has begun marketing VaxArray Influenza to flu shot producers around the globe, as this technology is not only faster and more sensitive than SRID, but can also be used to characterize several vaccine types for which SRID is wholly-incompatible (such as cell-based and recombinant vaccines)—all without the use of any sheep’s blood! Expanded uptake of VaxArray will not only enable faster of introduction of seasonal flu shots each year, but will also better-position the industry to respond to pandemic influenza threats, as VaxArray would meaningfully accelerate the development of a novel vaccine in a pandemic scenario, given the fact that potency testing is often a significant rate-limited step in vaccine development.

What About Other Applications in Global Health?

While the original application for VaxArray is in the production of seasonal and pandemic influenza vaccines, where time-to-market and speed of new development are critical, recent grant funding from the Bill & Melinda Gates Foundation (BMGF) has sought to expand use of the platform to the production of measles-rubella (MR) vaccines. MR vaccines are a staple of global immunization campaigns, with over 200 million doses produced annually and distributed across low- and middle-income countries to offer a lifetime of protection to every child that can be reached. MR vaccines are currently characterized by another dated and cumbersome process known as tissue culture infectious dose (TCID50), a potency test that takes up to two weeks (!) to generate a result. As such, BMGF identified InDevR’s VaxArray platform as a potential way to reduce manufacturing timelines by weeks or even months (e.g., 2-3 days for a result versus up to two weeks), thereby meaningfully reducing the final cost of this essential vaccine and allowing precious global health procurement funding to stretch further and reach more patients each year.

Adjuvant’s investment will help support the research team at InDevR working on MR, and hopefully this important test can be validated and rolled out to manufacturers in the near-term, with an emphasis on the suppliers serving the public sector in low- and middle-income countries. Adjuvant’s investment will also fund development of one additional global health application for VaxArray beyond MR, which will be selected after evaluation of the candidates with the greatest potential impact. 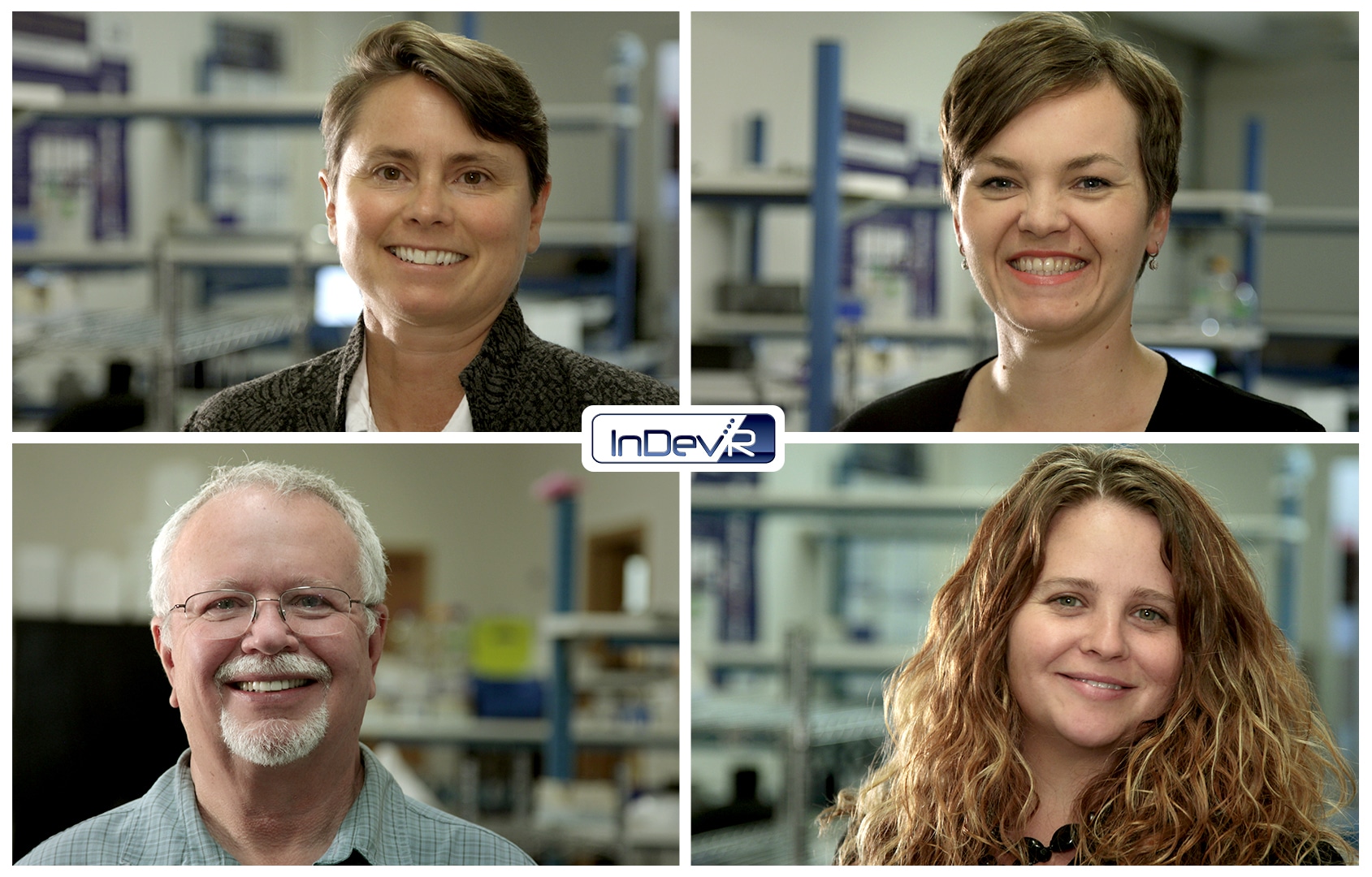 Experienced Innovators with a Shared Passion for Global Health

Yes, we believe that VaxArray Influenza could become the gold-standard for flu shot characterization around the globe; and yes, we believe that other global health applications will be successfully developed; but that confidence stems from more than just the underlying technology. InDevR’s senior management team is comprised of a seasoned group of scientists from the University of Colorado Boulder that have been developing these novel analytical products for over a decade. We only invest in management teams that share our passion and enthusiasm for saving lives around the globe, and in this instance, we couldn’t be more excited to partnering with the InDevR team on this journey!